One of my favourite walks so far was along the Thonburi side of the Chao Phraya river. This is the older part of Bangkok and was the original city before it was shifted across the river. 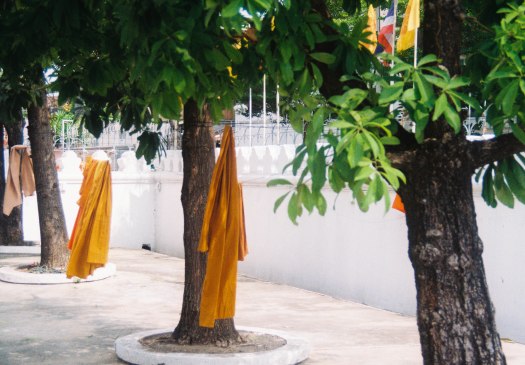 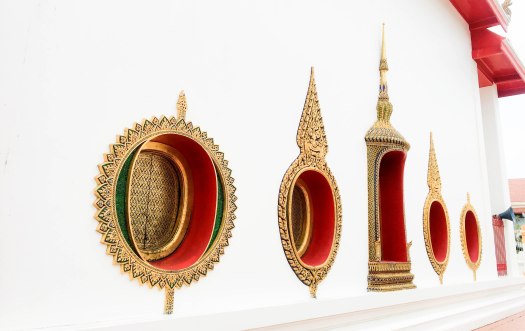 This is one of the oldest communities and a mix of temples, Chinese Shrines, mosques and churches. Old Chinese communities and more modern local Thai communities. I started this walk with two friends and we stuck to the book for our guide.

Meandering through the Klong San market alley’s, an old train terminus to the riverside, seeking out one of the original forts, no longer guarding the edge of the river but nestled amongst hospitals, homes and car parks. A stroll along some of the older streets with rambling wooden homes, built, literally, over the klong, goodness knows what would happen in a flood! We were far more of a curiousity here than in many places. Our cameras met with smiles and waves rather than suspicion.

I love this about touristing through Bangkok. Most people are welcoming, happy to see us and keen to show their corner of the city. The houses may be rambling, crumbling and somewhat derelict (or at least the neighbours appears to be) but the care and love shown to their homes is evident in the pride and relative joy taken in the pots of bougainvillea, and plants crowded along the edges and porches. And more evident by the pot plant sellers you see around the city, wheeling their carts of lush green foliage. 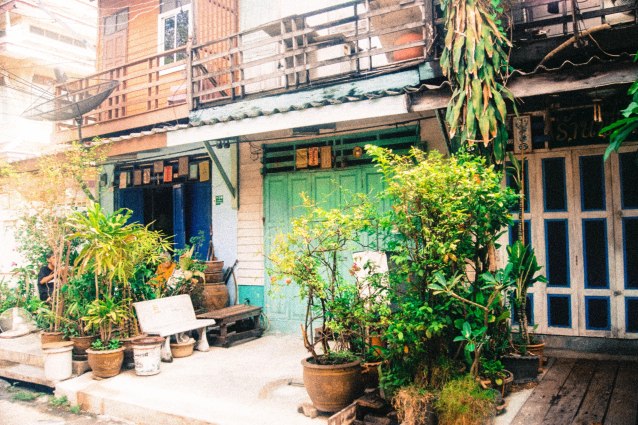 On to the riverside, we pick a random soi and come to a view across the mighty Chao Phraya, watching the chaos that is ferries, long tail boats, long barges slowly making their way up and down. We are stopped by a policeman who smilingly indicates that we can’t walk along the riverside, due to the footpath having fallen (a rather long time ago) into the river. This we thought was all he had to say but instead he wanted to help further with a group photo! Smiling and gesturing all along.

We continued on the walk round to one of the more impressive Chinese pagodas on the river, I’d seen it a number of times from the river but to see it in context in the grounds of a temple and next to one of the oldest and largest Chinese merchant mansions was delightful.

We made our way through the alley’s again, and past the recent reincarnation of old warehousing into very trendy, very modern restaurants, architects and furniture stores. A stop for the obligatory iced cappuccino, always forgetting to ask for ‘mai wan’, or ‘no sugar’. But a sugar hit on a sweaty Bangkok morning is always welcome!

From here we got a little less dedicated to the book and wound our way through the alleys, this was a fabulous way to feel we discovered the smaller parts of the city. Ambling through temples with concrete junks in honor of the Chinese junks bringing Buddhist monks, now residing in the carpark.

We found our way through tree lined streets with old shop houses, nestled next to modern complexes being built. Across the inky, black klongs running their slow and silent (and often smelly) way between homes. More Chinese temples, around to another community, the treasure discovered this time were noodle makers. The most picturesque of shops with two ladies and a large dominating machine. They obligingly got the machine running and demonstrated the noodles being made.

As we wove our way along the riverside and down alleys we discovered old warehousing in various states of ruin, or having found a new life with storage and businesses being run out of them. Through quiet tree-lined alleys with no room for anything but motorbikes. A wrong turn and we found our way back to the lovely Princess Mother Memorial Park.

This park was created in honor of the mother of two recent kings, Rama VIII and Rama IX. She was born a commoner in a home in this area. Rama IX, King Bhumibol, shortly before his mother’s death bought the land, the home she grew up in no longer existed but the land was put aside to be the green retreat it is now, with museum, gardens and a life-sized statue of the Princess Mother enjoying the space. 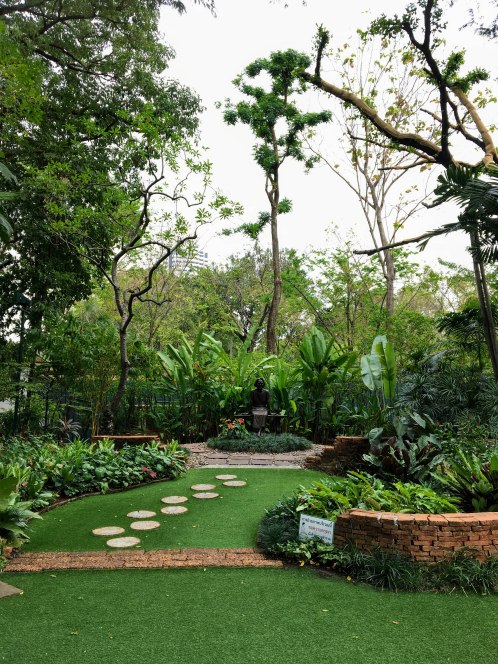 At this point we were only half way through the suggested route, but in need of lunch and to return home to pick up our kids from school. We wound our way through the streets running behind the park looking for our lunch.

Fairly quickly we found a perfect duck noodle soup shop. And when we asked about a cold bottle of coke we were quickly bustled into a table and ushered next door to the small local store. Icy cold Coca-Cola glass bottles (a mainstay of travellers in hot countries around the world) were found for the princely sum of 10 baht each, brought to our table in the duck noodle soup shop and we were able to relax, chill out and enjoy our meal.

This is one of my favourite walks so far as it typifys why Bangkok is so fascinating. Just walking away from the main roads can mean stumbling across life unchanged for generations. Pockets of history that give me a glimpse of such a different culture, society and life. This is changing at a fast rate, with shop houses being pulled down in many parts of the city and replaced with large apartment buildings.

This is a story common around the world. On one hand growth and development means better standard of living for some. However, it looses some of the character and energy of the city that makes it so unique. And often these improvements do not improve the life of those that are moved on to make room. It’s so fascinating to see the history of Bangkok in terms of how it has grown, is currently lived in and watching the growth of a modern city emerge around it all.