It’s been a few weeks of leaving, travelling, arriving and general unsettled-ness. And it’s not quite over. In about 2 weeks we’ll be back in our home, with our belongings, but still no cat (in New York till July).

On arriving back to Auckland we arrived in various states of run-down. Kids had had fevers and colds on and off for the last month, hubby and I had our share too. But on arriving and for the first week I was hit with laryngitis. I’ve never suffered from this before and the exhaustion, sense of defeat and being unable to hear, taste or smell really does take away the pleasures of being home.

We have been staying in a temporary apartment in the city. We’ve enjoyed being in the hub of Auckland, which is in sharp contrast to the hustle, bustle and chaos of Bangkok. And it feels even sharper when I’m not well. Resistant to enjoying where I was and still mostly living out of suitcases was becoming a pain.

Week two and the kids had recovered enough to start school. They were keen to get started at the primary school in our neighbourhood. A gorgeous small school nestled in the Waitakere bush with views across the west of Auckland. The school I went to at the same age. It was confronting to move around the school, wading through so many memories. Amazing how school looks so small where it once was so big. And the number of familiar faces I see, those from the community and even those I went to school with also. Delightfully my hubby’s cousins kids go to the same school, even in the same class as my son.

The kids are happy and trying to settle in. Our son is thrilled to be back in ‘the fringe of heaven’ as our village is called in Maori. He misses his friends in Bangkok and aspects of the lifestyle. So far we’ve managed to get him in contact with friends. Our daughter, at just 5, started year 1 and as her personality allows has thrown herself into it. 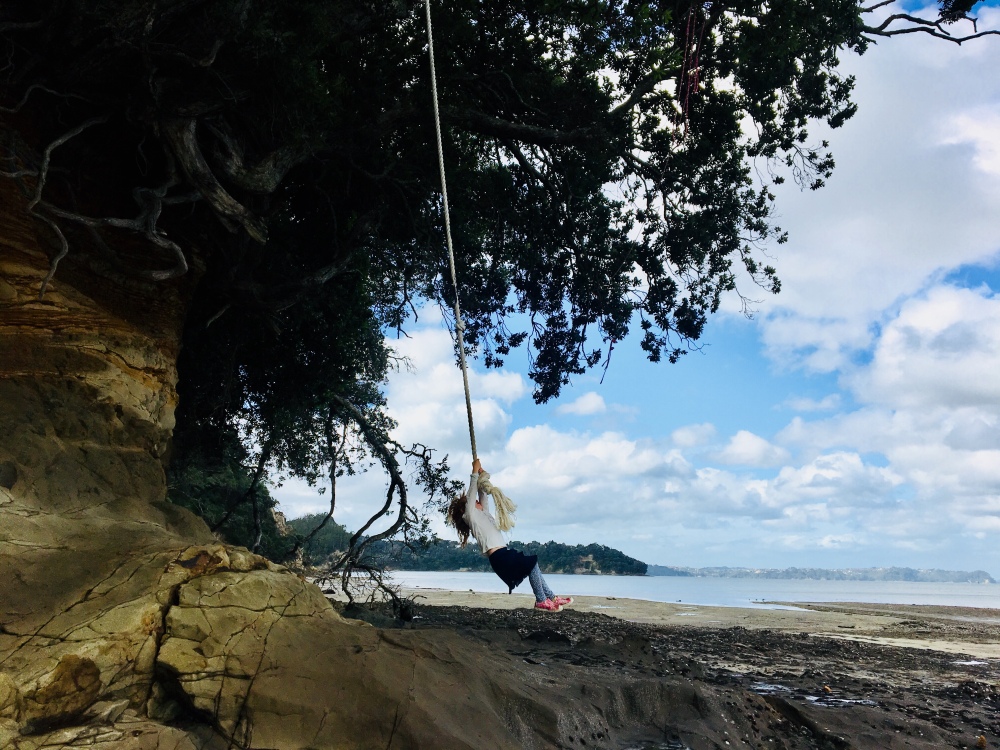 That same week it was looking very doubtful we’d be moving into our home until August! Due to our tenancy agreement. What followed (while hubby was in China) was several sleepless nights and mad rental property search in an inflated market. I explored every option including moving to the family bach on an island for four months!

Needless to say it wasn’t great for the mental juggle that is re-patriation and settling in. Thankfully, our tenant agreed to move and we are now less than two weeks from moving.

Add to that I had a looming ‘significant’ birthday. I’m one of those hugely annoying people that usually embrace and celebrate birthdays to their fullest extent. What else do we punctuate our lives with but a celebration of our lives so far and the time to come. However, timing, tiredness and a sincere feeling of having ‘landed’ back in real life sent me reeling a little. It’s only a number, and I’ve a lot to be thankful for. I’ll keep reminding myself of this!

We’ve got one more pack/unpack to go. And are spending the Easter break on Great Barrier Island with my in-laws. This remains one of the special retreats for us. The children especially have a bond to this place that is becoming integral to their beings. Something I don’t feel I’ve ever felt to a place.

Auckland is beautiful, the air is fresh, the food and coffee great, the people familiar and life is comfortable. We’re embracing the outdoors with many trips to the beautiful parks, beaches and what I’ve come to appreciate hugely are the fabulous playgrounds/scooter parks.

On the flip side we’ve been hit twice (in the car – parked or at lights), been sworn at for crossing the road and the general impatience when driving and parking has very quickly shaken the Thai ‘cool heart’ out of me.

It’s only the beginning of this re-settling process and surrounding ourselves with our favourite people. And being in our home will definitely help open the door for the next chapter.